Blog - Latest News
You are here: Home / Blog / What to look for when purchasing a new TV – TV Contrast Ratio, Part...

Contrast ratio – what is it?

Wikipedia defines it as “The contrast ratio is a property of a display system, defined as the ratio of the luminance of the brightest colour (white) to that of the darkest colour (black) that the system is capable of producing. A high contrast ratio is a desired aspect of any display. It has similarities with dynamic range.” A contrast ratio of a TV or projector is one of the important aspect of what makes up good a display as this is what will be most noticeable, When we look at buying a new TV nobody really looks at the specifications any more and in a retail environment we’re told to look at different screens to see what looks good to us.

To basically explain what contrast ratio is, it is basically the difference between how black the dark images can get compared to how bright the white images it can get, and this is express as a ratio, so we would all think the higher the figure the better the picture, right? Unfortunately it is a bit more complicated that just that. There is no true standard measurement for measuring contrast ratio as there are a few different ways it can be done and each way will produce a different number while taking in conditions in like what pictures are on the screen that are measured and other factors like the lighting conditions.

When we look at a TV that is really bright, really vibrant the picture can look washed out and it will have really poor black levels, this is when the contrast settings on the TV are turned right up to max, and then the picture mode would be set to something like Dynamic. Although this may look like a good picture to the untrained eye, but in fact this kind of picture will have a blue ting to it, this is what’s setup in a retail environment to only sell TVs, only when when the contrast is turned down to the correct level as well as the brightness, then the TV will have better black levels and will not be as bright, only the will the colours will begin to look true. So these days it’s really hard to judge a “value for money” TV, the only real way to get the full benefit and realistic colours from your TV is to get the TV calibrated professionally.

How measurements are done;

One way to measure it is called “static contrast ratio”, this is measured with a full black screen and then a full white screen, the second way is “dynamic contrast ratio” this is done with a black and white checker board pattern which is a more real world situation as you’ll never watch a full white or full black image, it’ll be a mixture of both. Both ways will produce different results because the second way (checker board) will “leak” light into the dark areas as compared to a full dark or full white screen, and then there are the lighting conditions, are the lights on or off while the measurements being done? This will effect results as well. 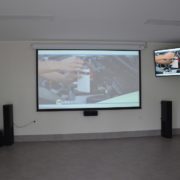 Security System – what they can do and who should you trust with installation...

What to look for when purchasing a new TV – TV Contrast Ratio, Part 2
Scroll to top